So, how are your 2018 resolutions and goals coming?

Confession #1: I can cheat at cards

Confession #2: I have cheated in card games. No. Not for money, but for amusement. Dealing one of my friends seven Wild Cards in a game of Uno and then watching the expression on their face is a guilty pleasure of mine. Yes, cheating at Uno won’t get me on the cover of Casino Monthly, but it will keep me from getting beaten up by security.

Confession #3 (last one, I promise): A huge chunk of the hundreds of books in my personal library deal with the methods, devices and legends of card cheating. And there are few legends bigger than P.J. Kepplinger and his holdout device.

I have to admit, I love these things. Equal parts card cheating gadget, Rube Goldberg device and a gizmo you’d see Artemus Gordon use on the TV classic The Wild, Wild West, these devices are hidden up the sleeve and take and place cards in the hand.

These devices arrived shortly after the civil war (much like Artemus Gordon) and were touted within the cheater’s world as an easier way to achieve the same results of difficult sleight of hand. Also, these devices were an easier way to get caught and shot. That is until the Kepplinger Knee-Spread Holdout. 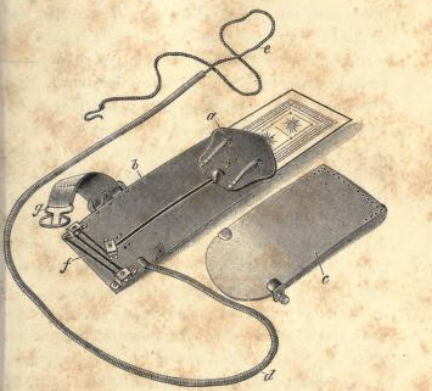 P.J. Kepplinger was a San Francisco card cheat and mechanical whiz. His holdout design and its release made his name immortal in the card cheating world.

The genius of its operation is the invisibility. No awkward bar to push up and down; the activation of this holdout is entirely invisible because it happens underneath the poker table. A cable goes up from the knees, up to the hip, then the shoulder. There it goes down the arm where the sneak (the part of the device that grabs the cards) can go in and out of the sleeve at the owner’s will. The cheat sits down and reaches into a small slit in one knee of his trousers. He takes out a cable and attaches it to the other knee. He moves his knees apart and the sneak appears in his palm. He moves his knees together and the sneak scurries back up his sleeve. It may sound crazy, but when used in the hands of a practiced professional it is a thing of deceptive beauty.

In 1888, then, Kepplinger’s relaxation for some months consisted of a ‘hard game’ with players who were all professional sharps like himself. The circle was composed entirely of men who thought they knew the ropes as well as he did. In that, however, they were considerably in error. He was acquainted with a trick worth any two which they could have mentioned. However much the fortunes of the others might vary, Kepplinger never sustained a loss. On the contrary, he always won. The hands he held were enough to turn any gambler green with envy, and yet, no one could detect him in cheating. His companions were, of course, all perfectly familiar with the appliances of their craft.

Holdouts in a game of that description would have been, one would think, useless encumbrances. The players were all too well acquainted with the signs and tokens accompanying such devices, and Kepplinger gave no sign of the employment of anything of the kind. He sat like a statue at the table, he kept his cards right away from him, he did not move a muscle as far as could be seen; his opponents could look up his sleeve almost to the elbow, and yet he won.

This being the condition of affairs, it was one which could not by any stretch of courtesy be considered satisfactory to anyone but Kepplinger himself. Having borne with the untoward circumstances as long as their curiosity and cupidity would allow them, his associates at length resolved upon concerted action. Arranging their plan of attack, they arrived once again at the rendezvous, and commenced the game as usual. Then, suddenly and without a moment’s warning, Kepplinger was seized, gagged, and held hard and fast.

Then the investigation commenced. The great master-cheat was searched, and upon him was discovered the most ingenious holdout ever devised.

STORY BREAK:
What do you think happens next? Did the other cheats beat him nearly dead? Did they shoot him dead? Keep reading …

What did the conspirators do then? Did they ‘lay into him’ with cudgels, or ‘get the drop’ on him with ‘six-shooters’? Did they, for instance, hand him over to the Police? No! ten thousand times no! They did none of those things, nor had they ever any intention of doing anything of the kind. Being only human—and sharps—they did what they considered would serve their own interests best. A compact was entered into, whereby Kepplinger agreed to make a similar instrument to the one he was wearing for each of his captors, and once again the temporary and short-lived discord gave place to harmony and content.

Had Kepplinger been content to use less frequently the enormous advantage he possessed, and to have exercised more discretion in winning, appearing to lose sometimes, his device might have been still undiscovered.

Everything. Kepplinger’s victims had been cheated. Sure, they were cheaters, too, but let’s not get tied up technicalities. Bottomline: They lost money.

In 2018 you will probably face cheating and loss.

You and I won’t meet up with a cheat packing a Kepplinger holdout. (Well, you probably won’t.)

Will we stew in our emotional juices, thinking up ways to get even?
Or will we act on our ambitions?

PS: If you’re looking for a speaker that’s a little different (and much more amazing and funny) for you next meeting, convention, business event, reach out to me at 1.888.Doc.Dixon or drop me a line here.