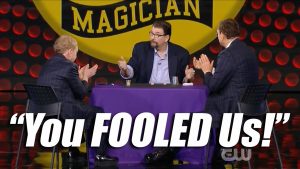 Now in its sixth season, Penn & Teller: Fool Us is an incredible showcase for magicians – maybe the best ever. Every episode brings in magicians from around the world who are trying to fool two of magic’s smartest minds, Penn & Teller.

I appeared on the show this season, my episode airing on The CW network September 9, 2019. If you haven’t seen it yet, you can watch it here. In fact, if you have seen it, watch it again. These blogs will make more sense that way!

My Path To Fool Us: Two Roads Meet At The Fork

Road One
I love the shell game. Three walnut shells. A green pea. It immediately engages with its deceptive simplicity. It’s not like poker where you have to know the difference between a full house and straight flush. No. All you have to do is keep track of what shell has the pea. Simple stuff, right? It is that assumption of simplicity that has helped grifters from around the world take millions of dollars from their victims.

For street grifters and conmen the appeal of the game is obvious: it gets the money.

For me, the appeal is the hook. When I’m performing at a private party or corporate event and I lay out the three shells I actually see the people lean in. They’re thinking, “I’ve heard of this game, but I have never had the chance to play it. It’s a glimpse into the fascinating world of hustlers, but in a totally safe way. This is going to be fun.”

When I’m representing my clients at a trade show booth it’s part of my traffic magnet strategy. While the audience members lean in at a party when they see the shells, trade show attendees walk up to the booth. Prospects watch, certain the pea is under this shell, only to discover it’s under that shell. The winning shell, of course, represents the product or service I’m representing at the trade show booth.

For magicians, a classic climax of the routine is where the pea is covered with a shell AND a shot glass held down by a spectator’s finger. Despite this, the pea vanishes and reappears underneath another shell. It’s a great finish, but several years ago I realized I wanted something better for my work and for my clients.

“I wanted the pea to be initialed by the spectator to rule out a duplicate pea. I wanted the initialed pea to end up in a place that’s impossible, surprising, but yet makes sense.”

And that’s exactly what I created.

Road Two
In December of 2018 I received a phone call from a friend of nearly thirty years, Mike Close. He’s one of the magic consultants on the show, and is one of the most knowledgable and respected magicians on the planet. In addition to performing, for the past 30 years he’s been sharing his work with magicians through his books, DVDs and video downloads.  Mike was calling me to see if I’d like to have one of my tricks published in his newsletter. A gracious offer from Mike and one that I immediately accepted.

The Fork
While on the phone I thought of my shell game routine and pitched it to Mike for Fool Us.
His reply: “Love it. Send it.”

On December 18 I sent the producers a video of the routine.
And waited.
The producers of the show go through hundreds of submissions before making their final choices. I had confidence in the trick, but even with the Fool Us team being the best in the world at filming magic, I knew filming a trick whose focus was an autographed 10mm pea would be a challenge to get on the air.
So I assumed nothing and just waited.
On February 5 I got the email, “Congratulations, we would like to officially book you to appear on Season 6 of Penn & Teller: Fool Us”
My shooting date was March 5.

*Not the 2002 British apocalyptic horror film

For the 28 days between February 5 and March 5 my home because Fool Us Prep Central. Now keep in mind, my wife and I have seven kids – a 29 year old married daughter living in Virginia, and at home six sons ages 12,11,10,8,6, and 4. For readers doing the “you know what causes that?” joke in their heads, for our six sons the answer is adoption. But adopted or biological, six boys that age are loud, rambunctious, and deserve and demand daddy’s time. So what’s a magician dad to do?

Muscle Memory
Much of sleight of hand is thinking while practicing and rehearsing so thinking isn’t necessary during performance. The required moves just effortlessly happen, like the muscles have a memory of their own. That level of preparation is necessary no matter what the venue is, but is especially needed when trying to fool two legendary magicians on national television.

So how did I hone the muscle memory?
And still present the shows I had booked in February?
And still run my business?
And most importantly, still try to fulfill all the responsibilities of a husband of one and father of seven?
I rehearsed the routine in virtually every gap in my schedule.

If I had five minutes to spare at home, I’d walk in my office and rehearse the routine. Some times I had over an hour. Other times it was just that five minutes. Many times I thought I had five minutes, only to be called to Dad duty. Would it have been easier to make like Superman and go off to a magician version of a Fortress of Solitude to prepare? Sure, but if my first priority was making things easy I wouldn’t have seven kids. My seven kids make my life better, not easier, and I wasn’t going to use them as an excuse not to prepare.

I went through at least fifty pounds of walnuts that month. In addition to the rehearsals, the script was tweaked and rewritten for the unique performing situation of Fool Us. The pea was changed from a plastic green pea that smudges slightly to a cork pea that would better display the ink for the camera. Even the method, which was already solid, was slightly altered to make it a bit more bulletproof.

March 1 I flew to Las Vegas.

For what happened in Las Vegas, read How I Fooled Penn, Teller & Myself – Part Two.