In honor of Father’s Day, a story about my dad

My late father quit high school after the ninth grade when he was fourteen years old. It was in the heart of the Great Depression. He had parents and siblings that needed to eat, so in keeping with the theme of this post, to him the decision was a …no-brainer. At first he worked in the coal mines for a couple of years (it was a different time) and then he built a successful trucking business in southwestern Pennsylvania.

When he was in his early twenties he was socializing with some friends in a tavern — OK — He drinking in a bar with friends. Dad would have busted my chops bad on that the earlier pretentious wording — and met one of his former high school teachers. The teacher said to him, “Oscar, I was so sad when you quit school. You had brains. You were a smart kid.”

My dad, then bringing home more money than the man who was talking to him said, “I can always buy brains.”

My dad loved telling that story.

Now, so you won’t misunderstand, let me emphasize my father wasn’t putting down the need for education. A self-guided education was a big part of what made his business a success and in the context of the story, he was referring to the knowledge he needed to run a successful business. Dad was a lifelong learner and reader. He valued education, both in himself and those he employed.

He was simply telling the man there was more than one way to get knowledge, and that is particularly true during challenging times.

So let me break down what Dad did:
He recognized the reality of his situation — a brutal economic time and a family that needed him.
He “bought brains”, meaning he got his smarts outside ordinary channels or hired those who already have them, and was willing to do so again if the the need came up.
He acted quickly.

The specific challenges differ, but nearly all businesses are being hit hard today in one way or another. Rather than give specific advice on what you should do, let me tell you what I did and I hope it serves to inspire and motivate.

For thirty years my business has put me in front of groups of people, bringing amazement, hilarity, motivation, and inspiration. But now the phenomena called “groups of people” is on hold for a while. Will it come back? Of course. But for right now and the near future it doesn’t exist. So what were my options?
1) Stress out
Or …
2) Educate myself in video streaming production.
3) Buy brains, meaning spend money to buy the expertise of others to super quickly learn what I need to learn …to in effect spoon feed myself the smartness of the best people in streaming video.
4) Take action.

I opted to combine 2, 3 and 4. I did 2 very, very quickly (less than two weeks) by turbo charging it with 3. My default option to not to spend money foolishly is even stronger because I’m the son of a parents who lived through the Great Depression and a father of seven. In my current situation, foolishness would be to hold on to that money. So I slammed a fat wad of cash on the Zoom meeting and streaming video education bar and said, “Leave the bottle.”

This knowledge lead to 4, part of was buying the best equipment for the task (saving me a ton of money because I didn’t buy the wrong equipment). 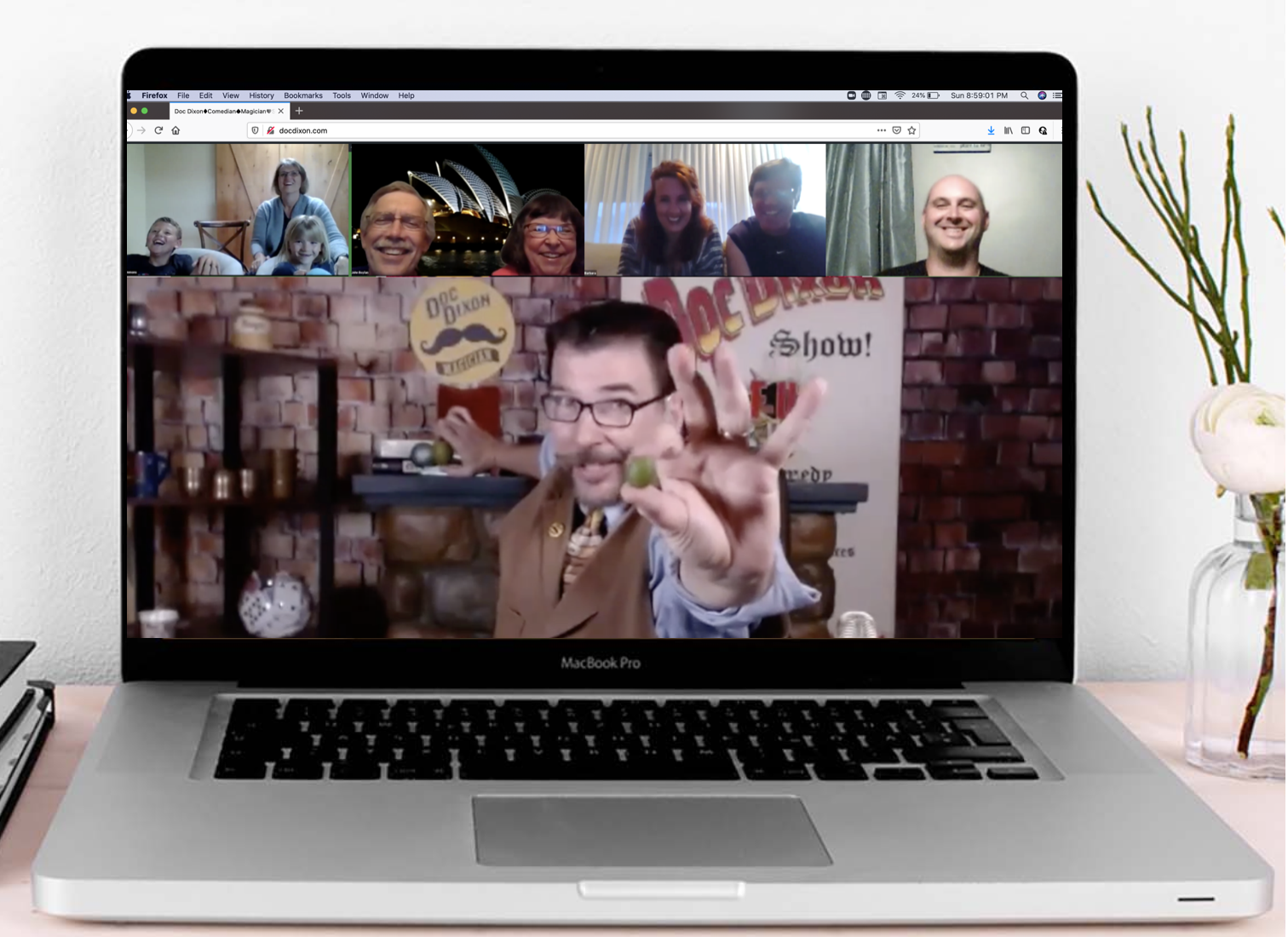 What’s YOUR reality?
What brains should YOU buy?
What actions can YOU take?

And while we’re talking, how can I help you bring amazement, hilarity, motivation, and inspiration to your next online event? Just this past week I’ve helped organizations make there meetings exciting and team-building, and helped charities raise thousands in a single show.
What can I do for you?