The moment when I had not yet realized I had fooled Penn & Teller, but Alyson Hannigan did!

If you haven’t read it yet, please read part one of this series.

March 1 “Walnuts, sir? Do you know the duck guy?”
I flew out of my home near Atlanta and a monkey wrench was almost thrown in before I got off the ground. In every rehearsal and performance of the routine I crush a walnut. Not wanting to go walnut shopping in Las Vegas, I brought a bag of about a hundred walnuts with me. For reasons that were never explained to me, the walnuts in my carryon bag sent up a red flag to the TSA. I was delayed about twenty minutes in line. I stood there, smiled nice, and kept thinking, “They are just nuts.”

I was finally allowed to pass and arrived in Las Vegas March 1. It was fun chatting with the show’s driver on the way to the Rio as he shared a few stories about the other acts. Lesson learned: my minor hiccup with the TSA and walnuts in Atlanta is nothing compared to traveling internationally with half a dozen ducks.

I settled into my room and worked the routine a dozen times.

March 2, 2:00PM, Shoot 48 second spot that precedes my performance
The Fool Us team are tops. The director of my spot, Larry Herbst, is great to work with. A kinder, more gracious, more professional director I could not ask for. His entire team is the same way.

Oddest and most oddly professional moment of the whole thing: when I shaved that morning I apparently missed a small whisker on my left cheek. The camera operator pointed it out, then took out his Swiss army knife, popped out the blade, and proceeded to dry shave that sucker right off my cheek. I sat there thinking, “I bet this never happened to Houdini.”

That 48 seconds was the result of three hours of shooting with me. When I finally saw it September 9 on TV, I was very pleased with the intro segment and absolutely loved that Larry closed it with me saying, “Penn & Teller, it’s time to play the game.”

After the shoot I took a walk around the casino, just to get rid of some nerves. Had dinner with Mike Close and a caught up on a few years of not seeing each other. Wonderful time. Mike is the behind the scenes magic ringmaster/plate spinner of Fool Us and is the person Penn & Teller talk with while they are deliberating the method of the trick. I went back to my room and ran the routine another dozen times.

March 3 – 5:45PM, Rehearsal (Off stage, Belize room – Penn & Teller Theater)
I run through the routine for Mike, the director, and the tech team in a small conference room near the theater. Plenty of laughs. It felt loose and fun. The magic goes perfectly …except for one not so small detail: the routine went over seven minutes. Not a small problem in a TV spot that’s supposed to be five minutes. When told this I reply, “Not a problem. I’ll tighten it and we’re good to go.”

I go back to my room and perform the routine two dozen times, tightening the pacing and script. When I hit 4:50 ten times in a row I stopped.

March 4 –  A day off
Made a few business calls and sent emails and, you guessed it, worked the routine several times. Had lunch with a fellow trade show magician who was in town. Always great to break bread with others in the business. He showed me his twist on a classic magic routine. Because I was 26 hours from showing Penn & Teller my twist on a classic magic routine, this was great to see. 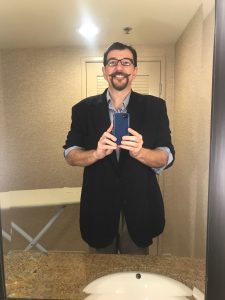 March 5 – Show Taping
10:30AM Call time for dress rehearsal
2:00PM Showtime
As per show procedure, that morning I text a member of the show team a pic of myself in the clothes I’d be wearing for the show. It’s a standard TV practice to make sure I’m not wearing anything that would not work well on TV, like a checked pattern or bright white.

You can see the pic to the left. I know. I’m no fashion model, but here’s my reason for sharing this. The team member responded to the text with …

This attitude of encouragement is the whole show. Look at many of the other talent showcases on  television. Frequently the judges are snarky. The contestants have to submit to the indignity of some prefab sob story. Ugh.

Now look at Fool Us. Everything about that show elevates the craft and the guests. When the guest magician does not fool them, take notice: Penn will always graciously praise them.

And don’t forget Alyson Hannigan, who is charming and gracious during the entire magic marathon that is the Fool Us filming schedule.

Back To The Schedule …

10:30 am After being guided through the maze that is the backstage of the Rio, I go on the Penn & Teller stage to do a run through of my routine. Everything goes smoothly and I am jazzed.

I go back down to the green room. The director comes to chat with me, paraphrasing,  “Doc, you got the time down, but punch up the funny to what it was before.” In the on-stage dress rehearsal I had rushed through the performance, sacrificing funny for speed.
I respond, “Not a problem.”

Waiting to go on, I relaxed, drank 5 cups of coffee (if you know me personally, you’re thinking, “Huh, cutting down, Doc?”), and chatted with other magicians from Germany, Spain, and Scranton, PA. Yes, even Scranton.

Keep in mind, the live audience doesn’t see the 48 second profile you saw on TV. I walk up to the table and set down my props. Penn & Teller are sitting in their chairs. A warmup comedian is chatting up the crowd between the acts, talking about “egg laying mammals.” I make eye contact with Teller and say, “That’s a monotreme.” Teller nods his head and smiles approvingly. At least that’s how I choose to interpret it because I like to think I’m not the only magician who knows such odd things.

Alyson Hannigan, ” Check out the magic of DOC DIXON!”