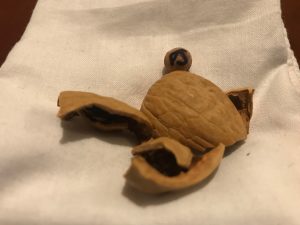 This is part three, where I’ll talk about what has happened after the show and how I fooled myself.

If you haven’t read part one or part two of this series, I recommend you do.

Last post we left off where I was about to begin my performance of my version of the shell game.  I conclude my performance. Penn & Teller deliberate for what seems to be at least ten minutes while Alyson Hannigan and I chat. Yes, this is edited down for television. Then Penn begins his part. This, too, is edited for television. And then …

Penn Jillette: “You fooled us.”

Hugs and handshakes. Penn, “What a great routine!”

Penn & Teller walk with me off stage. We take a few pics. I thank them profusely. Their graciousness in hosting magicians from around the world advances the craft I love so much. Mike Close is there — big hug to my old friend. Larry Herbst, the director from my intro segment is there. More hugs. I am ecstatic. Round of huge congrats from the crew.

I go up to my hotel room at the Rio and call my wife and tell her the great news.

Because of the non-disclosure agreement I signed, the first four and a half months after the show were hurry up & wait.

And now the real work begins …

July 15 I received my air date. I was permitted to announce my appearance on the show, but not the result. I go into promotion overdrive — TV interviews, press articles, emails, etc.  Getting eyes that matter on the show because that’s what businesses do.

September 9 my episode airs. Sit down with my wife, 6 sons and in-laws in our living room. There were a few non-trick related additions in what you saw on TV or online, like the music, the “ding-ding-ding” after I said “round two” and “round three.” These were all added in post-production. As I watched the show at home with my family I was thrilled at the talent of the Fool Us team in these enhancements.

Within seconds after Penn Jillette said, “You fooled us,” congratulations start to flood in via social media, phone, and text.  All greatly appreciated.

Second wave of promotion drive begins, more TV, emails, and a podcast interview with a best selling author who is also a magic fan.

Finally,  how I fooled myself:
Only after winning did I realize how much
my clients won.

For trade show clients, they now say, “Come to our booth and see the magician that fooled Penn & Teller!” Of course, once there, I amaze them with magic that incorporates my client’s message. Interestingly, I’ve had clients point out that advantage TO ME before I mentioned it to them. Marketing professionals tend to understand things quickly.

For my public and theater show clients, “Come to our venue and see the magician that fooled Penn & Teller!” Every theater want to put “butts in seats.” This helps.

And my private party clients love it, too.

September 21 first my wife and I flew out to Las Vegas for my appearance in the Penn & Teller Show September 22 and to officially receive my Fool Us trophy.

Next Post: Just like those Quinn Martin productions from my youth, I have an epilogue …
Tales from the Rio Hotel & Casino, my performance in the Penn & Teller Show, and the MONKEY ROOM!